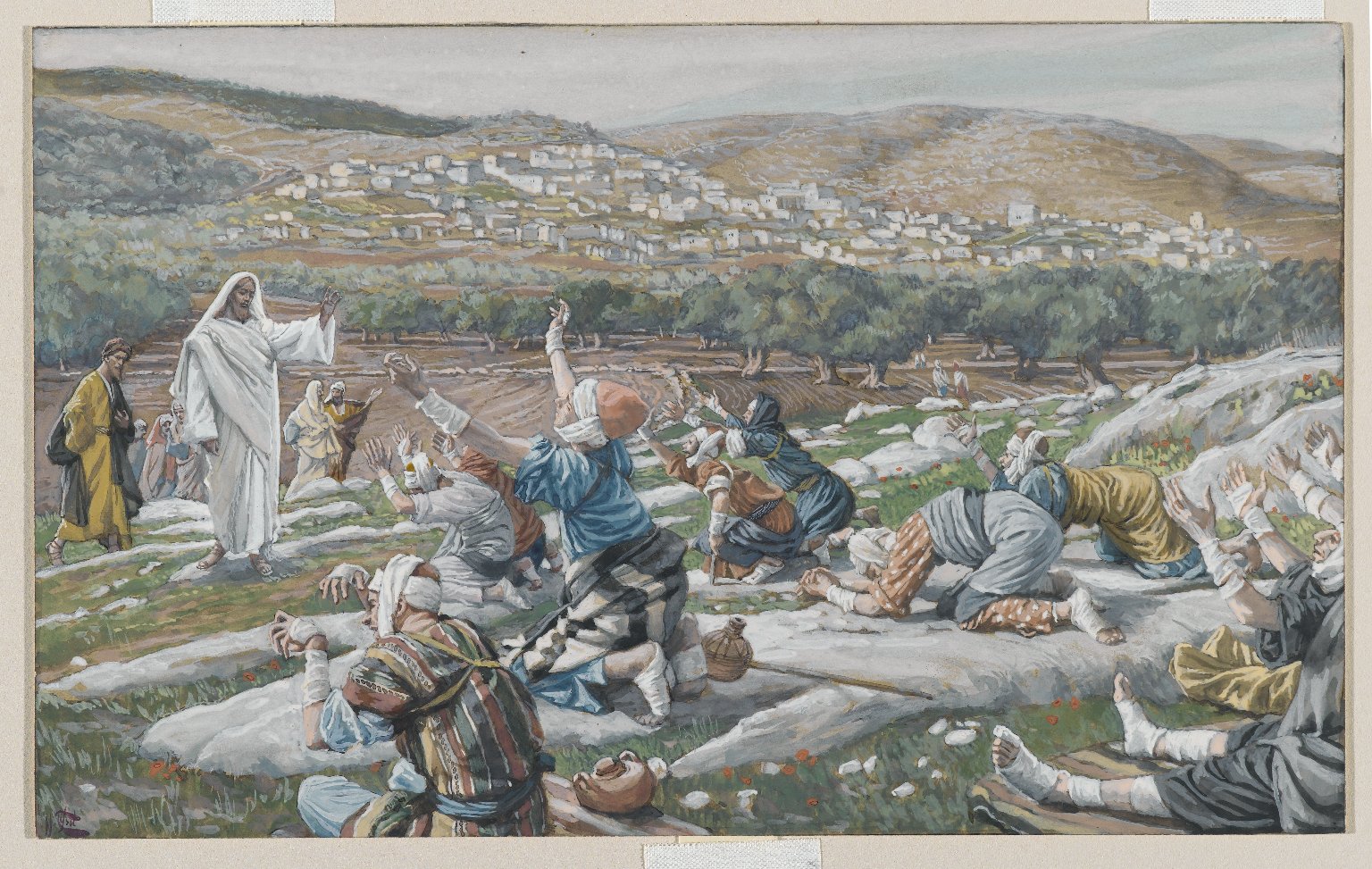 Your Faith has made you well.
A reading from the Paraclete Press.

With the eyes of the Spirit, and with the gift of faith, St. Francis could see Jesus’ presence under the appearance of bread and wine in the Eucharist.

The same could be said about the way he saw Jesus in others. Francis was able to see Jesus in the leper. He was told to embrace the one he was most afraid of, and turned off by, and he found the real presence of Jesus in that person.

St. Mother Teresa said the same about the poorest of the poor, and the dying. But it is true of all people. Who are the lepers in our lives? Who are we most afraid of, or turned off by? It is only by embracing them that we find Jesus in everyone.

Jesus and his disciples are on their way to Jerusalem:

They are traveling in the border area at the south of Galilee, and this area is where the Samaritans lived.

He has and is traveling in a racially-mixed area.

On the way to Jerusalem Jesus was going through the region between Samaria and Galilee.

As he entered a village, ten lepers approached him.

Keeping their distance, they called out saying, “Jesus, Master, have mercy on us!

Leprosy at the time of Jesus was a terrible disease; a disfiguring skin disease with soars and a difficult disease to cure. Once a person caught this disease and was diagnosed, they were banned from the rest of society. They “could” attend synagogue (but, staying in an isolated area) They must be first to enter and last to leave, and stay at least six feet away.

“The person with such an infectious disease must wear torn clothes, let his hair be unkept, cover the lower part of his face and cry out, ‘Unclean! Unclean!’. If he has the infection, he remains unclean. He must live alone; he must live outside the camp” (Leviticus 13: 45-46)

Some might remember my brother was diagnosed with HIV in the late 1980’s and later died in 1993. It was in the early years, when not too much information was out about the disease and everyone thought if you were in the same room, you could contract this deadly disease.

He was just sick, but did not have any outward visible signs.  I took him to one of his appointments. His own primary care doctor (there was only one who would treat patients in LV at the time), she was gone for that day and Everett had to see someone covering her practice. We were in the exam room and when this doctor opens the door, he stood near the door, about 6 feet away, to ask questions and do his exam. I do not remember the details of the visit, only that he would not come near us.

Everett often discussed how he and others were treated in those years, the lack of compassion and sympathy that many people and doctors had, send them away! Let them all die; it is their own fault!! but Everett remained faithful to God and our Lord and Savior to the end.

“As he was going into a village, ten men who had leprosy met him.”

“They stood at a distance and called out in a loud voice, ‘Jesus, Master, have pity on us!”

Master= Teacher or Rabbi have mercy on us! In other words, have pity on us!

You see they cannot come near the Teacher; they must stay back and yell out! Have Mercy on Us!  Have pity on Us! Have pity, a familiar cry that they have been uttering ever since they were diagnosed with leprosy and cast out of the villages.  Having pity, is to have compassion on the lepers. They are not asking to be healed, just asking for mercy, or whatever the Master can give them.

They know the reputation Jesus has… when it comes to compassion.

They were made clean:

Jesus has compassion and when he heard them and saw them, he said to them.

“Go and show yourselves to the priest.” And as they went, they were made clean.

As they walk away, they all realized that they had been made clean. This also means they can return to society and be part of society they no longer must live apart from their families.

There were 10 lepers that had been healed and nine walked about to go back to the villages to let everyone know they had been cleansed and were healed. Most likely these nine were Jewish and the one that went back to Jesus and fell on his knees was Samaritan.

“One of them, when he saw, he was healed came back, praising God in a loud voice. He threw himself at Jesus’ feet and thanked him—and he was Samaritan.” (17:15-16)

All ten had cried out for help, but only one has cried out in a loud voice, praising God!

Our first lesson, a letter from the prophet Jeremiah-sent from Jerusalem to the remaining elders among the exiles.

“But seek the welfare of the city where I have sent you into exile, and pray to the Lord on its behalf, for in its welfare you will find your welfare.” (Jeremiah 29:7)

“Do your best to present yourself to God as one approved by him, a worker who has no need to be ashamed, rightly explaining the word of truth. (2 Timothy 2:15)

As disciples of Christ, we are to look out for the welfare of others and then we can find our true self. Pray always and give God the praise and Glory. We can learn from others outside our own church.

Faith and Compassion for others.

We are all created by God in his image. What would we do if God stayed 6 feet away from us?

To maintain the life that God intended us to be, it is important, we continue to move closer to our heart’s desire, where the Holy Spirit lives and dwells.  St. Mother Teresa reminds us about the poorest of the poor, and the dying. Who are the lepers in our lives? Who are we most afraid of, or turned off by?  It is only by embracing them, that we find Jesus in everyone. See Jesus present under the appearance of bread and wine in the Eucharist. Bringing the Kingdom of God to life in the world around everyone. This is an example of how we are to love one another, serve one another, and know that love and compassion is the way that Jesus wants us to be.